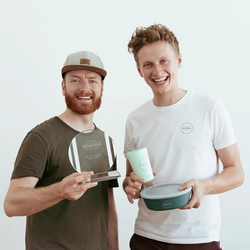 Ambitious reuse system providers, which aim to replace thousands of tons of single-use-packaging, presented their business models: Repack offers reusable packaging for e-commerce, Chep’s more than 120 million transport pallets are used in logistics worldwide, Bananeira extends the offer of food products in returnable glasses in German consumer markets, and Sea Me’s detergents and cosmetics in refillable glass containers are already available in many stores.
That innovative reuse systems can go a long way has also been proven by the 2021 Reusable Award Winners Recup. They started offering returnable polypropylene takeaway coffee cups in 2016. Now they are available in more than 7,700 coffee shops all over Germany. In 2019, they added the Rebowl to their offer, a reusable container for takeaway meals. Each Recup replaces up to 1,000 disposable cups and each Rebowl replaces up to 500 single-use food containers.

For 2021’s Refillable Award, the jury of the REUSE Conference picked a climate-friendly classic: The Dutch Brewers Association’s BNR bottles. Created in the 1980s, it is still the most widely used refillable bottle for beer in the Netherlands.  Consumers can return them in almost every supermarket in the country – most of the time regardless of whether the brand is actually sold there. Through its many rotations – it can be reused up to 40 times – the BNR bottle not only avoids waste, but also protects the climate.

The new General Secretary of CEGROBB is Swiss