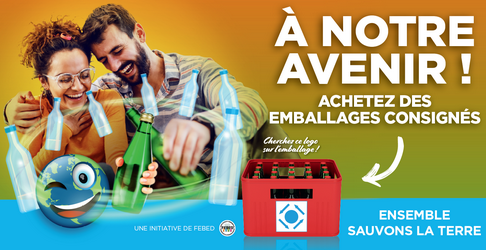 Belgian beverage wholesalers want to help solve the environmental problem and launch the campaign " To our Future! Buy Returnable Packaging"

A reusable glass bottle is the most energy efficient packaging. After filling it three times, you’re already consuming less energy than with a single-use package. The campaign is launched on the occasion of the "Drinks Distributor’s Day" on 21 November. The campaign motivates households to buy more beverages in returnable (reusable) packaging. The action is carried out in 134 drinkcenters, spread throughout Belgium.

According to Karine Van Doorsselaer, Professor of Product Development at the Faculty of Science and Design at the University of Antwerp, we need to move from a linear economy to a circular economy. A linear economy leads to waste, pollution and depletion of raw materials. One of the basic principles of the circular economy is that a product must be used as long as possible in its initial form, without changing it, and possibly by several users. Only when the product can no longer be used you have to recycle it. This principle also applies to packaging. The returnable bottles fit perfectly into this vision. Beverage producers are encouraged to apply it in their product development. A deposit glass bottle can be reused 50 times. Taking into account scrap, such as breakage and loss, a bottle is on average reused 30 times. When we know that in Belgium the average transport distance is 155 km (between the producer and the consumer) a glass bottle is the most efficient packaging as far as energy is concerned. Do not hesitate and buy your drinks in returnable packaging.

In addition, glass is an inert material, making it the most suitable packaging for beverages. There is no interaction between the bottle and its contents and it is recyclable without loss of quality.

In order to stimulate households to buy their beverages in returnable packaging, FEBED has developed the campaign "To our Future! Buy Returnable Packaging". The returnable crate is clearly present on our promotional material. The positive impact on the environment is reflected in the logo we developed. It shows the smiling earth, satisfied with the bottles that are continually refilled after the household has enjoyed a delicious drink.

Various promotional materials were made available, so that the customer sees the campaign as soon as he arrives at the parking (banner), a poster and totem greet him as he enters the shop, and hanging banners and wobblers (shelf talkers) remind him about the message while shopping in the shop. The action was supported by a Facebook campaign and an animated video was made available to be shown on the website and on the screens in the shop. The promotional material was not only developed for the Beverages Wholesaler Day. The aim is that it will be used for a longer period of time to convince the consumers to always buy their drinks in returnable containers.

It is not only through big investments that you can bring your stone to a better environment. With little things too, and without extra expenses, you can make a difference.

You can watch the report on YouTube via this LINK.